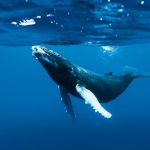 Animals are so much smarter than we think. And they have a sense of right and wrong. I’ve heard it argued that animals can have no salvation because they don’t recognize wrong or their need of Salvation, nor do they have a “conscience.”

I don’t know about this. I once had a cat who had a sense of guilt and shame, remorse, object permanence, long-term memory, patience, excellent language skills, need to come to me for saving, bonding relationships, analytic skills, pride of accomplishment, imagination and fantasy, abstract thought, creativity. She would recognize a friend’s voice on the answer machine and go sit at the front door, staring up at the doorknob waiting to see our friend. And we can all tell these stories about animals we have been close to.

The link below brings you to a story about Humpback Whales who have been rescuing prey from Killer Whale pods. Out of 115 rescues recorded by observers, in only 11% of these were the Humpbacks saving their own species. They have rescued Harbor Seals, California Sea Lions, Gray Whales and Ocean Sun Fish.

One of the commentators complains that the humpbacks are trying to starve the poor Orcas and no one is taking the side of the poor, gentle KILLER whales. Amazing how even the animals know that killing is wrong. Even the ones who must kill for survival do so only as much as they absolutely need.

What is wrong with us that we don’t listen to our consciences and follow what is right. Ellen White once said that Jesus came to save both the repentant sinner as well as the innocent. What can be more innocent than a Humpback Whale?

“For the creation waits with eager expectation for the children of God to be revealed. For the creation was subjected to sin, not of its own will, but because of us. Creation itself waits in hope that it also will be delivered from the bondage of decay when the children of God are delivered into liberty and glory. For we know that the whole creation groans and travails in pain together until now.” (Romans 8:19-22,  paraphrased)

Creation looks to us for its salvation. Why us? Because all the sin on this planet cannot come to an end until SOMEONE chooses to bring sin to an end in their own lives. We need to choose to stop the killing and help to save those around us. More heroes are wanted.

I prayed, "Lord, You can show me just what You want me to know." God continues to answer my prayer.
View all posts by MAM →